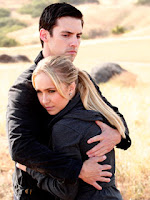 UGH, they have canceled my favorite show!! :/

It seemed inevitable but the news is nonetheless shocking: NBC’s drama Heroes won’t be back for a fifth season. The beleaguered drama only averaged 6.5 million viewers this year. It last aired on Feb. 8, when it only brought in a mere 4.4 million.

Article by Lynette Rice
Posted by Karen at 6:56 AM


Find the Best Daily Deal in Your Neighborhood

Find the Best Daily Deal in Your Neighborhood